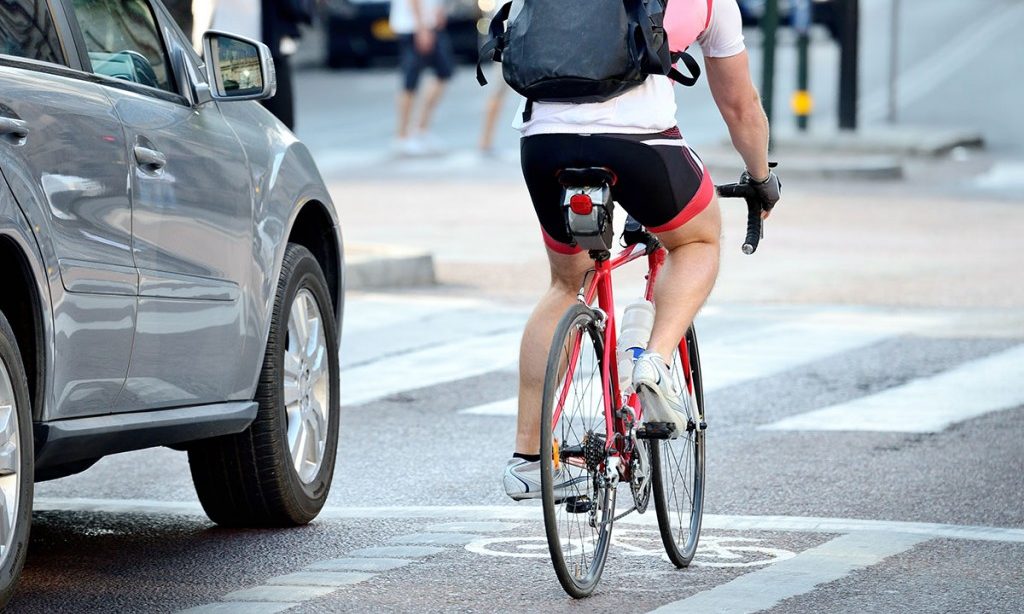 A bicycle is considered a vehicle on the roadway and has exactly the same rights as any other vehicle.

Bicycling is one of the most popular recreational activities in the United States, indeed, in the world. There are over 90,000,000 cyclists in the U. S. and over 30,000,000 adult cyclists.

In any given year we can expect 800 – 1000 cyclists to die on our roadways while some 500,000 will be treated for injuries. In fact, the first automobile accident in the United States occurred when a motor vehicle crashed into a pedal cycle rider in New York City in 1896!

Listed below are the six most common bicycle-related accidents and ways to avoid them. The types of accidents are listed in order from most common to least common. 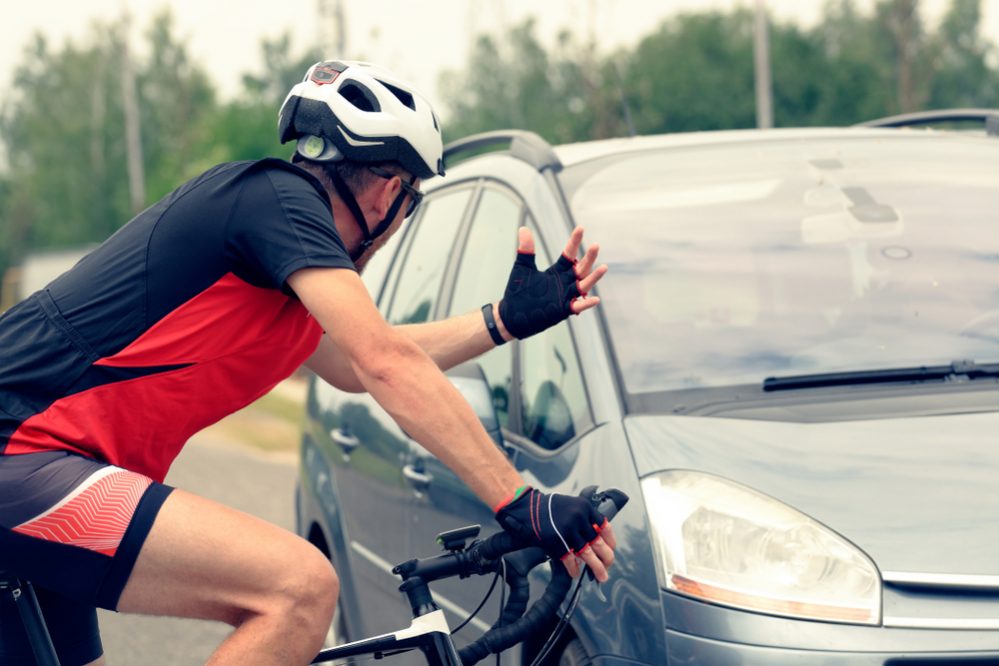 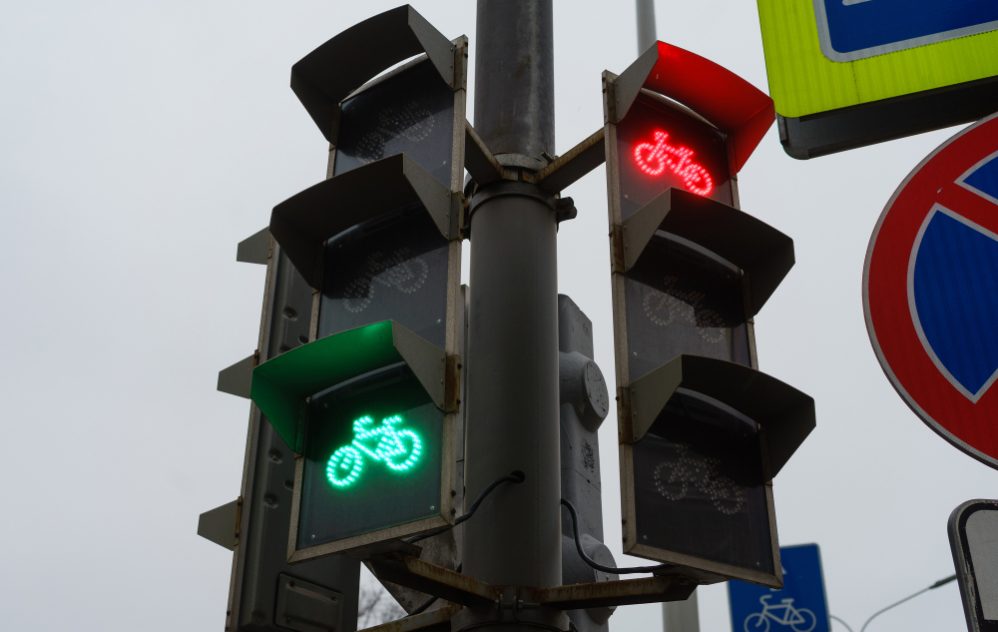 3. No Lights At Night 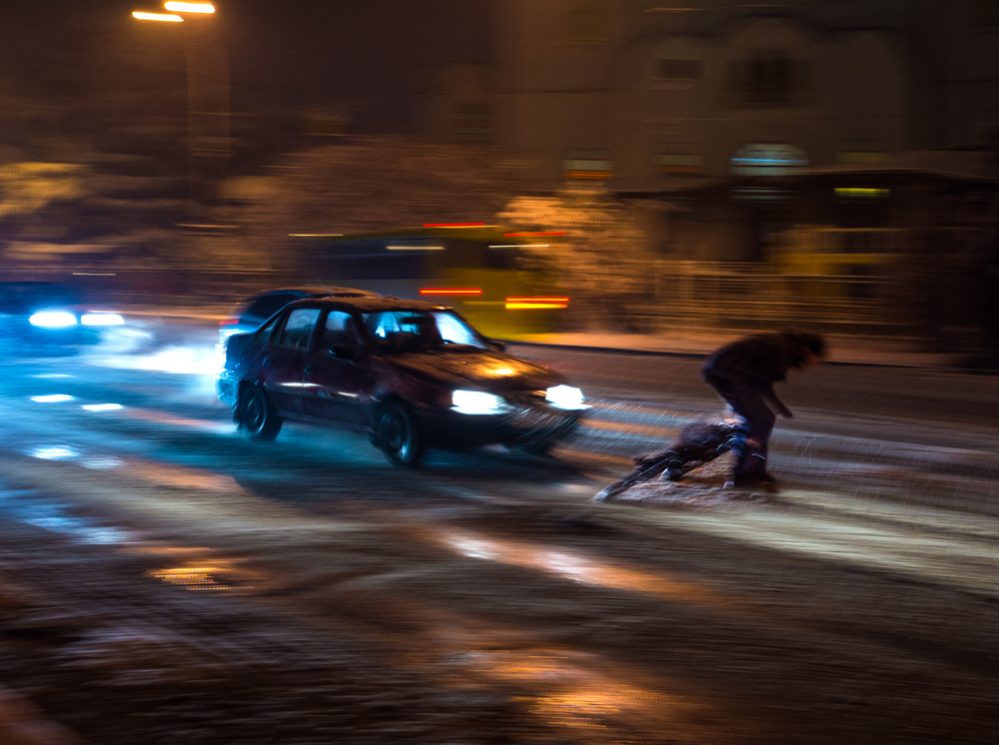 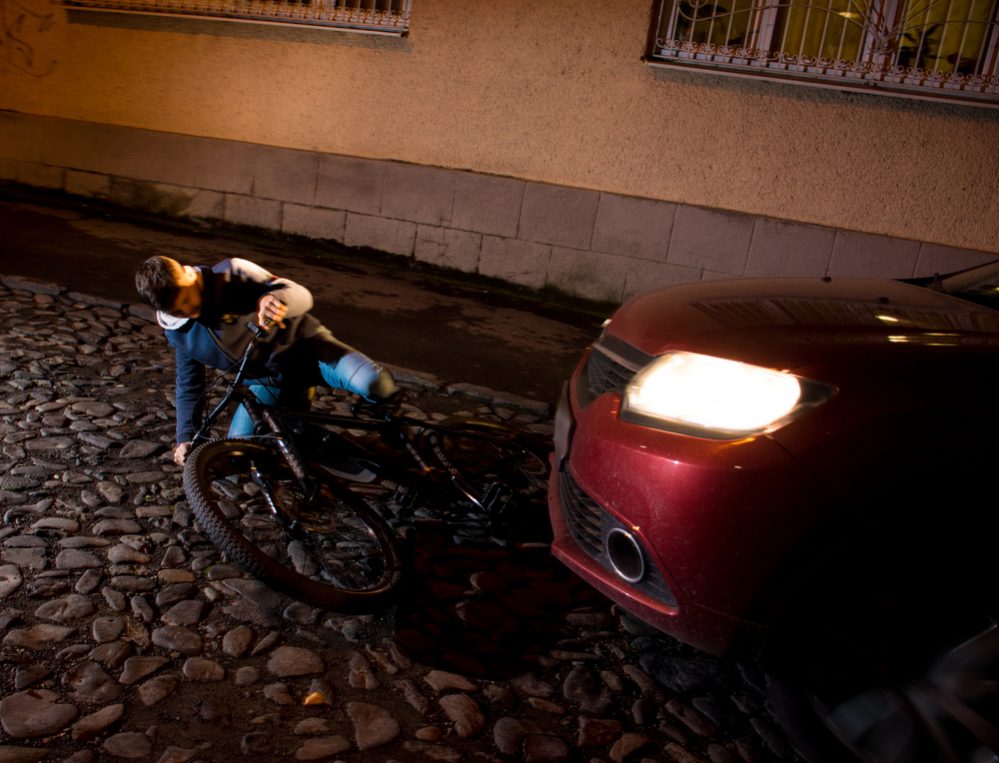 5. Being Hit From Behind 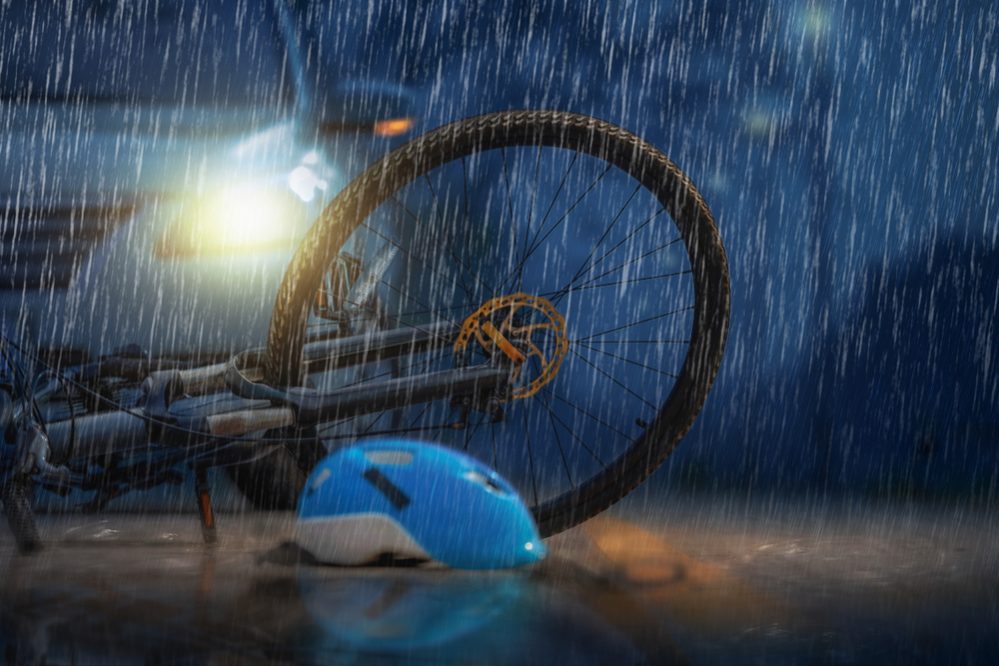 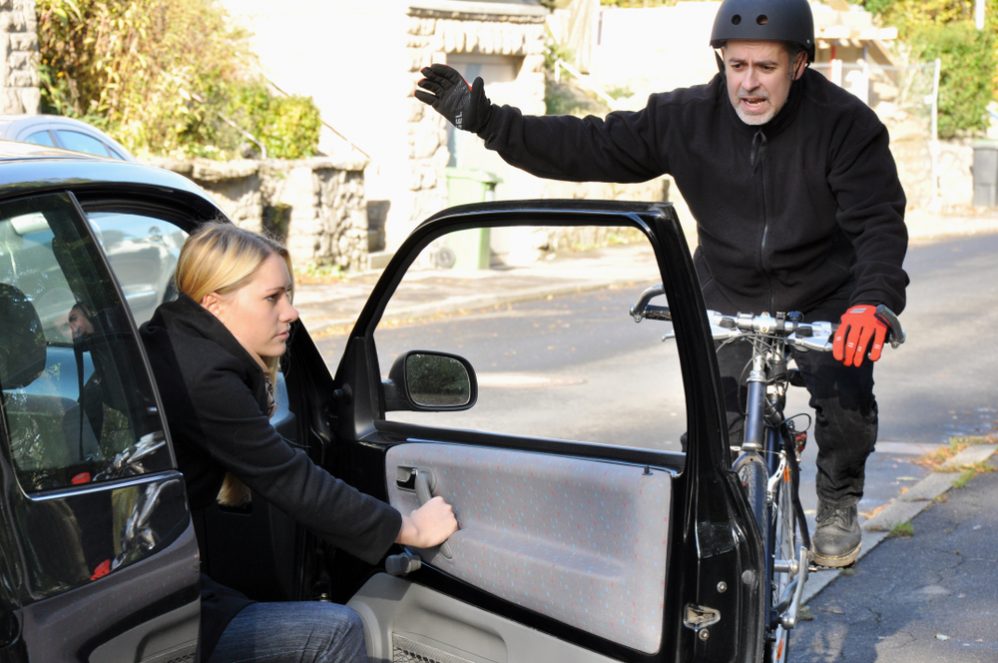 One of the most common bike accident scenarios involves motorists colliding with cyclists while overtaking them. It’s not difficult to understand why. My experience is that motorists perceive that lane lines are absolute and believe that they cannot cross them when passing cyclists. If they can squeeze between you and the lane line, they will do so no matter how close they come to you. Once they break the plane and cross the lane line they will usually allow sufficient room to pass. [I modestly call this the “Magas Phenomenon.”] In Effective Cycling,” John Forester recommends riding in the center of narrow lanes and just to the right of cars in wide lanes in order to encourage the motorist leave the lane to pass you and to give you some room to dive if you need it!. Cars still manage to frequently collide with cyclists during the execution of the passing maneuver and in Bicycle Accident Reconstruction and Litigation there is a virtual catalog of dozens of reported cases on this issue.

An interesting case arose in Idaho in the 1960’s. A 14 year old boy was riding on a narrow gravel shoulder of a two lane 24 foot wide highway. A motorist came upon the boy at 55 mph. A disinterested witness said the boy appeared to be having problems controlling his bike on the gravel and said the motorist neither slowed nor steered left. As the motorist approached, the bike operator sweved left onto the roadway in front of the car and was killed. The point of impact was one to two feet onto the roadway. The court ruled that the cyclist was entitled to use the right edge of the roadway as a matter of law since Idaho law, like Ohio law, requires cyclists to ride as far to the right as is practicable. The court stated that a motorist may not assume that a bike operator traveling on the berm will stay on the berm since he has a legal right to ride on the roadway. Kelley v. Bruch (Id. 1966), 415 P.2d 693.

In a 1987 Ohio case a motorist argued that he lost the cyclist “in the sun” while passing The jury, for some unknown reason, found the cyclist to be 20% negligent when the motorist struck the cyclist. The court determined that the motorists argument was not a legal excuse to hit the cyclist and found that the jury made a mistake when assigning any blame for the accident to the cyclist. Howard v. McKitrick, Lexis Slip Opinion, Ohio App., July 2, 1987.

In Ohio, a passing motorist must sound a horn before passing and the motorist is negligent if he fails to do so. However, courts have also held that a horn blown in an untimely fashion which scares a cyclist and causes the cyclist to move unexpectedly or lose control is also negligence. In one case a cyclist heard a horn close by, turned to look and moved left into a passing car. The jury found the cyclist to be 95% responsible for the wreck, but the trial judge reversed the jury’s findings and found the motorist to be 75% responsible!

The bottom line…keep an eye in your mirror and watch out for those passing motorists. Take up your fair share of the roadway and make motorists get into the other lane to pass you. Drive defensively people….as a famous TV character used to say…”Let’s be careful out there….”

Bicycling is one of the most popular recreational activities in the United States, indeed, in the world. There are over 90,000,000 cyclists in the U. S. and over 30,000,000 adult cyclists. In any given year we can expect 800 – 1000 cyclists to die on our roadways while some 500,000 will be treated for injuries. In fact, the first automobile accident in the United States occurred when a motor vehicle crashed into a pedal cycle rider in New York City in 1896!

ORC Section 4511.01(A) – Defines “vehicles” to include “bicycles.” This very important statute has the impact of making all laws restricting the behavior of “vehicle operators” applicable to cyclists. By defining “vehicles” to include bikes, the legislature has indicated its approval of bikes as transportation devices with a place on the roadway. This definition means that virtually every traffic law, including speeding, drunk driving, traffic control device rules, reckless operation, passing rules and the like, apply to motorists and cyclists alike. Cyclists are required to ride in the proper lane, are not permitted to ride “against traffic” and, generally, must act like any other vehicle on the roadway.

ORC Section 4511.52 – This section specifically makes all traffic laws applicable to bicycles whenever a bike is operated on any road or “any path set aside for the exclusive use of bicycles.” Thus, you can be cited by the police for reckless operation, drunk driving, speeding and the like even while riding on a bike path!

ORC Section 4511.53 – Requires bike riders to only ride upon the “permanent and regular seat” attached to the bike and prohibits a cyclist from carrying any other person on a bike except upon a “firmly attached and regular seat.”

Prohibits bicycle operation where one hand cannot be kept on the handle bars due to your carrying any “package, bundle, or article.”

ORC Section 4511.54 – Prohibits a cyclist from attaching his bike or himself to any other vehicle on the roadway. Thus, we are not permitted to grab onto those little ladders that are seen on the backs of conversion vans, and get pulled along as the van speeds away from a stoplight.

ORC Section 4511.55 – Requires cyclists to ride “as near to the right side of the roadway as practicable.” This section of the law is practically universal across the country and generates much concern among cyclists. As a practical matter, it rarely comes into play until there is an accident and a cyclist is hurt. The defense then typically argues that the cyclist was not riding “as far to the right as practicable” and was therefore in some way responsible for his or her own injuries. I have always argued, sometimes successfully, that this means “as far to the right as is reasonably safe to ride given the road conditions, traffic, and all other factors.” I argue that this gives us, at least, half the lane and does not bind us to within inches of the white line.

– a “bell or other device capable of giving a signal audible for a distance of at least 100 feet.” [Sirens and whistles may not be used.]

-an “adequate brake” for roadway use (i.e., no track bikes on the road).