Skip to content
Smart Motorist » How Many Volts is a Car Battery? (Not so simple) 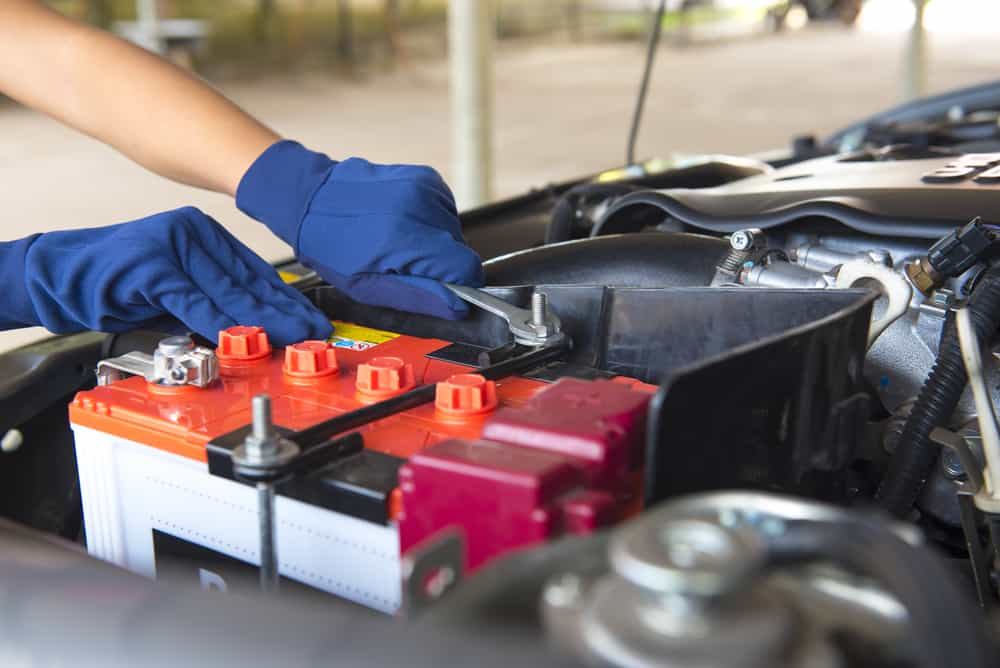 A battery is one of your car’s essential components – most importantly, it provides the charge to fire up the engine, and without it, your car wouldn’t start at all. With that in mind, you’re sure to want to keep your battery in good shape.

It’s important not to let your battery run down completely, but you’ll also want to know what kind of condition it’s in even if it’s not completely dead – so when it comes to testing it, you’ll need to know the answer to the question, how many volts is a car battery?

If you are looking for a preview of some of the things we are going to be talking about, you can check out this video before reading on. It also demonstrates how to test a car battery using a multimeter, something we will talk more about below.

How Many Volts is a Car Battery? Not so simple

Car batteries are 12v batteries, but you might be surprised to discover that if you test one, you shouldn’t get a reading of 12 volts. In fact, if the reading tells you 12v, your battery is more or less empty.

So what should it be?

The answer is, a healthy, fully charged battery should give you a reading of around 12.4-12.6v when the engine is not running.

How can you test your car battery? 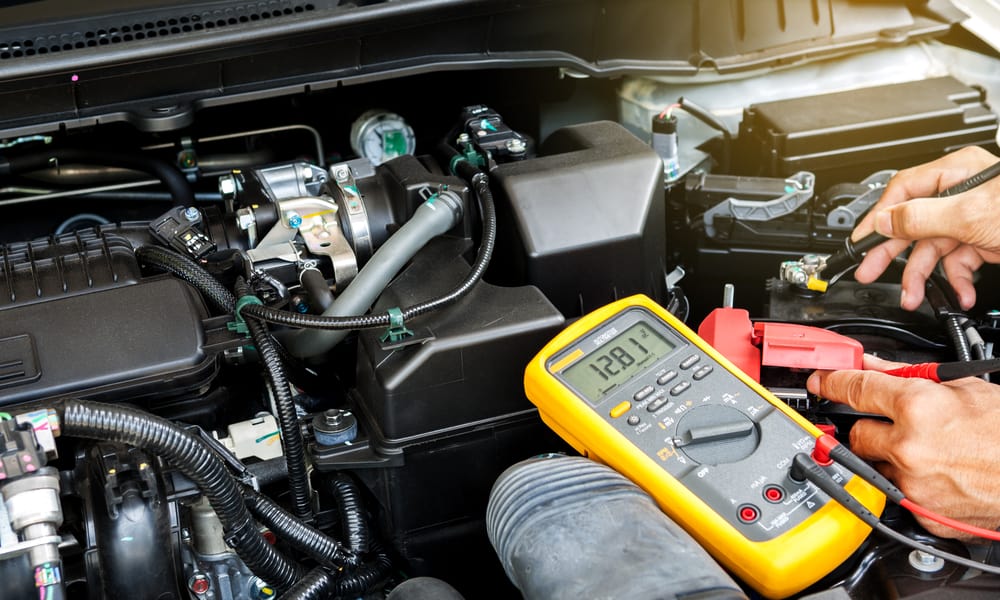 So the next question you will want to know the answer to is, how do you test your car battery?

The best way to do it is to use a multimeter. These devices are inexpensive and readily available, and they make testing your car battery quick, easy and accurate.

Before testing your battery, you should let it rest for a while – it’s best to leave it overnight or longer and then test it rather than testing it just after the engine has been running. If not, you will get an artificially high reading.

Since you are expecting a reading in the range of around 12-14v, take the multimeter and set it to 20 DCV (for readings of 0-20v).

Next, touch the negative terminal of the battery with the black lead and the positive terminal with the red lead. You will then be able to see the battery’s voltage on the readout of the multimeter.

If you see a negative reading, this simply means you have got the leads the wrong way around and are touching positive to negative and negative to positive – so switch them round and touch them onto the opposite terminals!

Again, you should be looking for a voltage of around 12.4-12.6v – anything less than this tells you that the battery is not fully charged.

How to test without a multimeter

If you have no multimeter, there’s still a way of testing your battery. It won’t be as accurate as using a multimeter, but in a pinch, it can tell you if your battery or your car’s electrical system will be likely to fail on you soon.

The test is easy to do. Simply start your car, and while it is idling, turn on the headlights. If they are dim, this indicates that the lights are drawing charge from the battery rather from the car’s alternator as they should be.

If revving the engine increases the brightness, it tells you that some charge is being drawn from the alternator but not enough to light them while the engine is idling.

Either of these signals that there is a problem somewhere that needs to be addressed.

What you want is headlights that are bright and constant when idling as well as when revving the engine – this tells you that everything is functioning as it should. 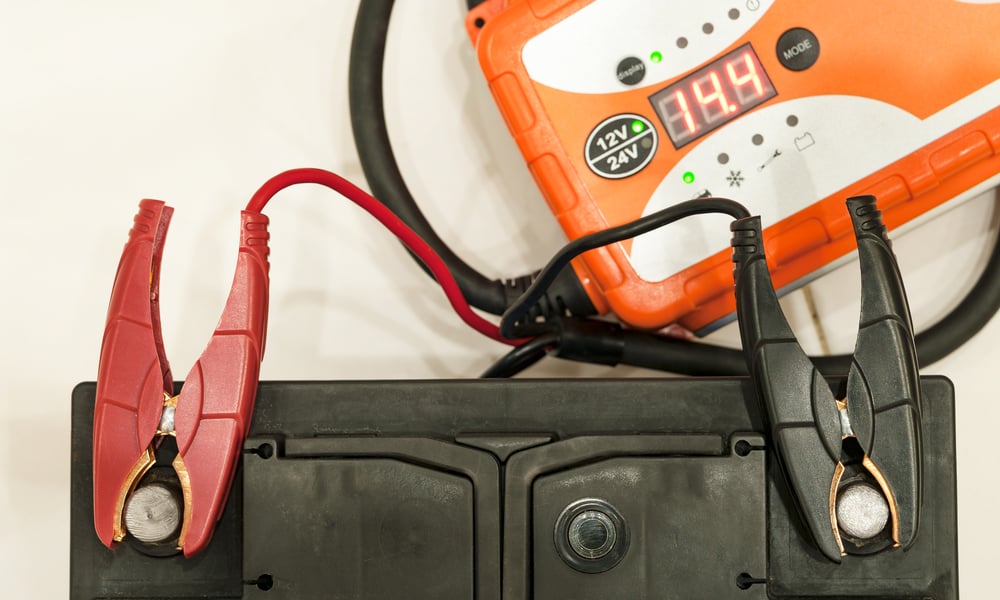 Another important test you can carry out to establish the health of your car’s battery is a load test. This test how well your battery performs when a load is placed on it, and to do one, you will need a special piece of equipment called a load tester.

As with the multimeter, load testers aren’t expensive – but they are quite specialized pieces of equipment.

With the load tester attached, apply a load to the fully charged battery for around 30 seconds and take a reading. A healthy battery should remain above 9.6v throughout the test. If it doesn’t, it is not in good shape and needs replacing.

When testing a battery, remember to always use proper eye protection since there is always a chance that a battery could explode.

How often should you test your battery?

Cars need regular maintenance, and as part of this, you should be checking your battery’s health.

For any battery, even one that doesn’t show any signs of wearing out, it is recommended that you test once every six months.

Of course, if you think that the battery is showing signs that it is coming to the end of its life, you should also test it. This will help you establish whether the problem really is coming from the battery or if there is some other fault somewhere in your car’s electrical system.

Finally, if you leave your car sitting for an extended period – for example, you have a car that spends the winter in the garage – you should test the battery when you bring it out and start using it again.

Note also that as part of testing your battery, you should also inspect it visually. A build-up of corrosion will cause it to function less efficiently, and if you don’t catch it early enough, it may damage the battery beyond repair.

Keeping your battery healthy is an important aspect of maintenance

As we just mentioned, keeping your battery healthy is an important part of car maintenance that should be done regularly. Like anything to do with cars, if you catch a problem early, it is usually cheaper and easier to fix.

In order to keep your battery in good health, you need to know what the voltage should be – and as we stated earlier, for any regular car battery, this will not be 12v but actually something a little higher. A test should read around 12.4-12.6v and 13.7-14.7v with the engine running.