At some point, practically everyone who drives a car will see those blue lights flashing in their rearview mirror, the signal that you are being stopped and need to pull over. It might make some people nervous, but the chances are, you’re probably only going to get a speeding ticket.

However, more observant drivers may have noticed a peculiar police habit – officers often touch or tap the back of your car as they approach your window. So, for anyone who’s curious, here we answer the question, why do cops touch the back of your car?

If you want a preview of some of the stuff we’re going to be talking about, you can also check out this video before reading on.

What happens when police pull you over?

If you search online, some fairly outlandish explanations have been suggested for why police officers touch the back of your car as they approach you. However, to understand the real reason, we need to think about what’s going on from the cop’s point of view.

When a police officer pulls you over, it’s usually for a very minor offence – perhaps you were driving too fast or maybe one of your taillights was out.

However, while you might feel a little nervous when the police officer approaches, if you’re guilty of nothing more than this kind of minor transgression, you should have nothing to worry about.

The police officer, on the other hand, has no idea who or what is in the car they are approaching.

A safety net for the officer 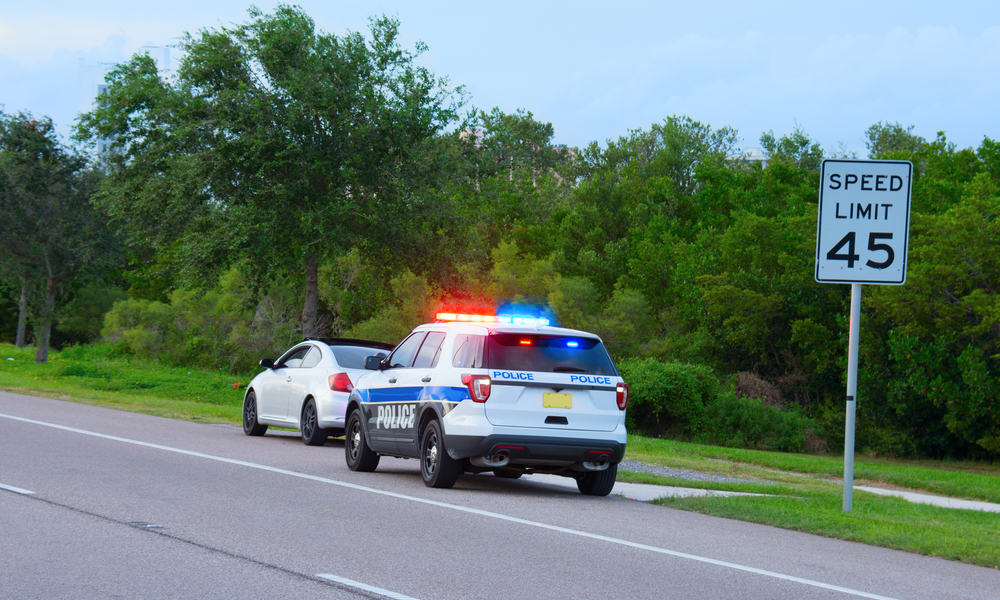 With this in mind, in the past, police were trained to touch the back of the vehicle as they approached it to leave a fingerprint on the car. This acted as a kind of security net if anything went wrong.

For example, if a criminal thought they were about to be arrested – perhaps for a murder or other serious crime – and out of desperation, decided to do try to escape, there would be some evidence to link the police officer to that vehicle.

If the police officer was then killed or seriously injured, and the criminal claimed that the car had not been anywhere near the officer or the scene of the crime, the fingerprint on the back of the vehicle would prove otherwise.

Of course, fingerprints can be washed off and will quickly disappear with exposure to sunlight, rain etc., but at least it would give something for other officers to look for.

Why do they still do it?

This is all very well and makes sense – but why do officers still do it now in an age where every car has a dashcam and every cop has a bodycam?

Well, these new technologies haven’t been around for so long, and older officers may just do it out of habit. After all, if you’ve been doing it that way for 15 years, you may find that old habits die hard.

Plus, it still gives you one other piece of evidence in case everything else fails.

But there are a couple of other reasons, too.

Another reason why police officers touch cars is that it is a technique designed to surprise potential criminals and disrupt whatever they might be doing as the officer approaches.

Imagine someone in the car who is scrambling to hide something they don’t want the police officer to see – a stash of drugs, for example.

Hearing a sudden tap on the rear of the car might confuse someone for a moment or two, just long enough for the police officer to see whatever it was the driver was trying to hide. However, for any innocent driver, the tap would have no effect.

This may or may not be effective, but since the police officer doesn’t know what to expect, it is a trick that’s worth trying to give them a slight edge.

To “feel out” the situation

One final reason is that the police officer is trying to get a feel for the situation.

Again, as we have noted, the police officer doesn’t know how the situation will develop. In the majority of cases, the driver is a regular, law-abiding citizen who may just have been driving slightly over the speed limit.

However, it’s a question of numbers. If the police officer stops 100 drivers, or even 1,000, eventually, one of them will have something to hide or will behave unpredictably.

For this reason, when police officers approach cars, they tune their senses to detect any signs that all is not well.

By placing a hand on the car, they might sense unusual movement in the vehicle. Perhaps it could just be the family dog – but until the police officer knows that for sure, tiny signs like movement can tell an experienced cop to remain vigilant.

Again, just placing a hand on the back of a car for a brief moment might not give the police officer any extra information, but one time in a hundred, it might set alarm bells ringing – and that could be the difference between resolving the situation safely and being killed or injured.

Some crazy ideas – and some rational ones

We’ve seen a lot of stuff online about why cops touch the back of cars, and some of it is very fanciful. The main reason is to leave a fingerprint on the car – even though this is no longer necessary – and there are also a couple of other reasons why cops persist with this habit.